“If you are careful, if you use good ingredients, and you don’t take any shortcuts, then you can usually cook something very good. Sometimes it is the only worthwhile product you can salvage from a day: what you make to eat. With writing, I feel, you can have all the right ingredients, give plenty of time and care, and still get nothing. Also true of love. Cooking therefore can keep a person who tries hard sane.”
― John Irving, The World According to Garp

I did not write a single word yesterday, but I cooked, and I thought about writing all day. I recently got my cart before my horse as far as writing goes, and I needed to take a step back. I needed to slow down. I needed to right my upended wagon.

I knew a few days in advance that I’d be having some friends over for dinner. I planned the meal, but had neglected my home. I need to fire the maid (me) because she never completes her tasks, and I need to tell the teenager (me. again.) who lives with me to grown up or get her own place. In lieu of those domestic refinements I had one choice: to do it myself. {bear with me, folks.}

I was slightly overwhelmed despite the fact that it wasn’t the President I was entertained, but four of my all-time favorite ladies. These are not the people you need to impress; these are the people who love you regardless. But still.

As I broomed dog hair out of forgotten corners I wondered if I had enough forks for five people. I knew I had enough dinner plates but that I didn’t have enough wine glasses, though my friends don’t mind drinking out of jelly jars. As I did this simple math I realized that in the two years I’ve lived in my little house I have not had more than two people over for dinner at one time, and more often it’s been only one at a time.

Let me be clear. I am not a fan of throwing big parties or the kind of party where you aren’t sure who will show up where the attitude is “the more the merrier.” The last big party I really remember throwing might have been my 1998 wedding, and even then I knew, for the most part, who was going to be there.

As I swept and mopped I realized that two people can be fairly comfortable sitting at the table in my kitchen, but to add a third I have to relocate Lucky’s food and water bowls. How the hell was I going to squeeze five?

Let me be clear on something else. I sort of love my house and sort of hate it. I like my bedroom, and I love my porcelain bathtub and front yard maples. The original hardwood floors in the bedroom and living room are beautiful, but the person who designed and installed my kitchen floor should be incarcerated. It’s too embarrassing to describe—so just trust me—but on more than one occasion I’ve said that if I owned the house I’d rip out the terrible linoleum because a plywood subfloor would be preferable to that hideousness.

I also really hate the walls. I doubt they’ve been painted in the last decade (maybe two) and imagine that the person who chose the dismal, dingy white was probably also the person who choose the dreadful kitchen floor and painted the inserts of the kitchen cabinets cornflower blue, which only further accentuates the institutional white.

The walls show evidence of previous renters mishaps with nails, screws, and wall anchors. Among other things, the pitted walls make it clear that not everyone cares about hitting a stud. I’ve covered most of it with my own art and pictures, but sometimes all I can see is the spaces in between.

Two years? Yes, two years. I’ve lived in this house for two years with a month-to-month lease. There was even a change in ownership, and when the new owners took over I made it clear that a month-to-month lease means a lot to me. I could have painted the interior of my house two years ago, but because I’ve always been one foot out the door I never wanted to invest, you know, an entire weekend and a couple hundred dollars to improve my house.

One more thing I need to make clear: it’s not entirely the walls’ fault. I’ve also not invested much within those walls. I have some nice antiques in my bedroom (NOTE: it’s the same bedroom furniture I had when I was a kid.) but my bed is third-hand. I have a full-size featherbed on a queen size bed, but at least the semi-vintage linens are semi-decent.I love my pillows.

For eighteen months I lived with and loathed a couch that was probably born about the same time I was. It was in great shape as it had been at someone’s lake house—and who sits on a couch when they could sit in a canoe?—but it was not awesome. Not even by a stretch. I finally surrendered seven months ago and bought a nearly new leather couch on craigslist, but only because it was a steal and would be easy to resell, you know, when I move out next month.

When I bought the couch (which was Lucky’s tenth birthday present), I also bought a little writing desk (because it was perfect), and last month bought an $18 mercury glass lamp at T.J. Maxx (because it was a good deal). These purchases were palatable because they can fit in the back of my Subaru without the seats folded down.

I “made” my bookshelves with four wooden boxes and two panels from bi-fold closet doors. I scored all of this stuff at Home Resource for about fifteen bucks, and was so proud of my cool, recycled, “temporary” bookshelves. I actually do like them, and like repurposing discards, but let’s be real: my cherished books deserve something a little classier, or at least more permanent. Or least made of components that most people wouldn’t put in their slash pile.

My kitchen table was snagged from a friend’s yard, and the chairs are vintage aluminum folding chairs from Missoula elementary schools. They have wooden seats, and are as comfortable as mid-century school assembly chairs could possibly be. They were only $3 apiece at Goodwill and I knew they’d be fine for provisional kitchen use, and then, because they fold up, could be retired for “extra” seating.

And then “all of a sudden” I’m having four beloved people over for dinner and not exactly sure where to put them. The only option was to relocate the dog bed and move the kitchen table into the living room, because pulling it into the middle of the kitchen would compromise my ability to open the oven or move with reasonable ease around the room.

After I finished wrangling the dog hair I made the switch. I set the table with my wedding china, napkins brought home from Guatemala eleven years ago, and, after a lot of hunting in my sans-organizer silverware drawer, five mismatched forks and knives. And what do you know: it worked.

I spent a lot of the day preparing the meal. I went to one farm stand and two grocery stores for my ingredients. I squeezed lemons and vitamixed dressing then blanched picked-that-morning ears of corn and sliced off the kernels for the salad. I peeled, chopped and roasted. I sliced, layered, and measured with my eyeballs. I gutted local melons and froze chunks so we could have a palate cleansing sorbet course. I figured if you’re going to be in a makeshift dining room you might as well be classy about it. 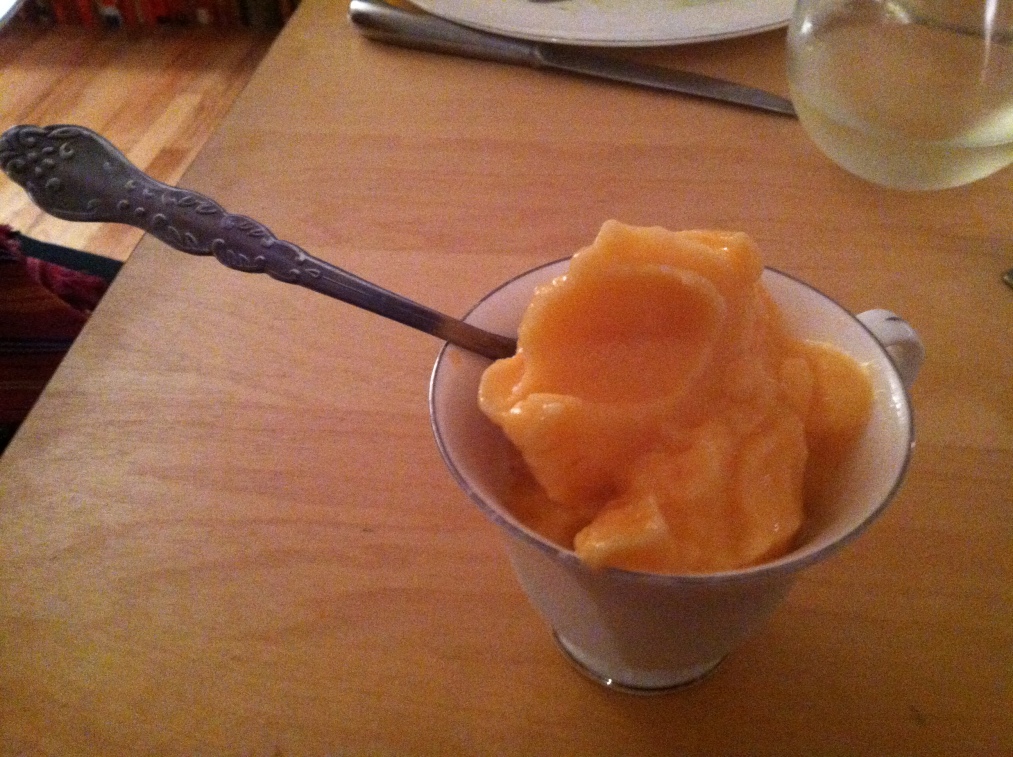 I felt guilty that I wasn’t writing, but found comfort in all of those action verbs. I simmered, skinned, and sliced. I salt and peppered. I got excited about having friends over, and wished I could have every single lady I love over for dinner. But alas, four at a time….

My friends arrived (early, god bless them) with bubbly and bruschetta. We hugged, we talked, and we toasted each other over and over and over again. And it never got old. We offered congratulations and consolations. We welcomed one back, and are in the process of sending one down the road a little ways.

At the end of the day it isn’t about the ugly walls; it’s about what happens within them.