Not in that order, and not just any hot springs and church. But how different are they, really? The both offer the same sense of peace and solitude–even in a crowd. To me anyway.

“I believe in God, only I spell it ‘Nature’.” – Frank Lloyd Wright.

And then there’s architecture.

But we start with church, San Francisco de Asis in Ranchos de Taos, an offshoot community from the Taos Pueblo. It’s old. I could have posted the picture I took of it, but since it is in the running for a building in the United States that has inspired the most depictions that seemed wrong. Georgia O’Keeffe painted it; Ansel Adams photographed it. And then there’s me with my iPhone.

The church is made of adobe—which Ranchos de Taos residents re-mud every year—and it’s said that for O’Keefe it was more like painting a landscape than a building since it’s made of the earth. She described it as “One of the most beautiful buildings left in the United States by the early Spaniards,” and that it’s as compulsory for New Mexican artists to paint as a self-portrait. Here’s one of her paintings that showcases the unique beehive buttresses of the backside of the church. She painted three images of the back and only one of the front. 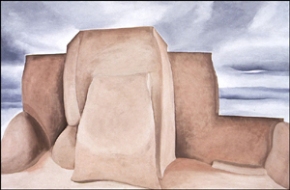 Adams shot the back and the front.

The building adjacent to the church clearly does not get a re-mudding every year:

Because of my constant, excessive hydration I had to go to the bathroom, so walked across the street to Martina’s, eyeing the trading post on the way over. When I walked into the trading post, Del Orr was teaching a (white) kid to make his own beaded moccasins and said, “Did you see the beams in that place?” He’s a gem. I thought he was talking about the church, but no, and he sent me back across the street to Martina’s to check out the back room before he’d let me shop. “Just walk through the big doors in the back,” he instructed, which is as much direction as I’d gotten in New Mexico.

I’d walked by those doors on the way to the bathroom, and hadn’t thought to push them open, but I’m so glad I did. I’m not diminishing the power of sanctity of a church, but I’ll tell you that I sat in that majestic hall and felt a sense of peace I hadn’t felt in awhile. And oh my, the stained glass. 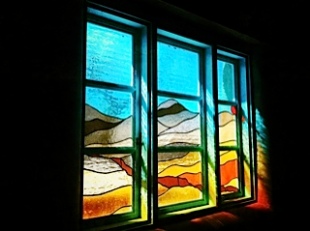 When I went back to the trading post Del told me that the beams are reported to be the largest in New Mexico. Maybe that was it–the sense of grandeur and preservation–another local claim to being the largest or biggest or oldest. He also told me that his trading post is the oldest continually operating trading post in the United States. I haven’t fact-checked this, but I believe him. The history in New Mexico is truly remarkable, and the connection to it so sweet.

“You can wear that with an evening dress or a sweatshirt,” Del said, obviously sensing my loose rules for fashion. I bought the necklace with my out of state check, wasn’t charged tax and Del and I exchanged a hug. Inside Del Orr’s Trading Post: 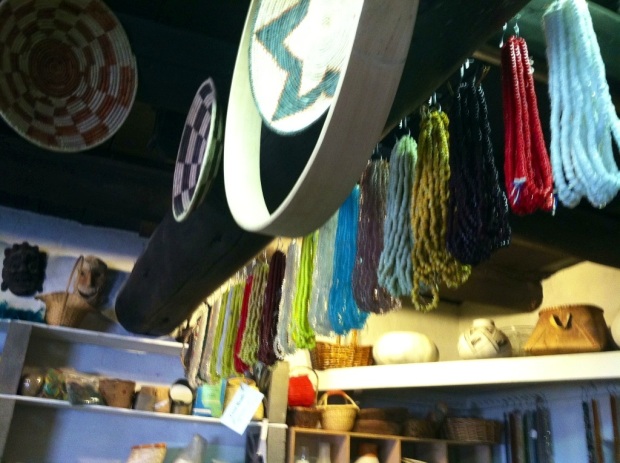 Later in the week I decided it was time to find the local, natural hot springs. Levi and Amanda had gone twice in two days and raved about it. I knew that if I waited too much longer I’d regret it. I’m halfway through my stay here—the winter is not so young. More action is required.

I met a nice family from Maine in the parking lot, which was good, because even with all my traveling I’m still not excited to be alone in a gorge with a naked man, which is what I would have encountered had the family not been there. Solitude is usual the goal at hot springs, but I was grateful for this family and the children who were amazing, natural conversationalists.

It was a cold day, and I got out, dried off and dressed in the wind before they did. I snapped a photo of them soaking together and emailed it to them. Here they are:

A few more photos from my time at Stagecoach Hot Springs, and one from the ride home. Love. 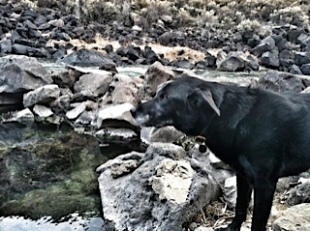