Mimi and I had dinner alone last night because Maureen went out with her cousins. Before I’d even served her she slipped me sixty bucks and said, “I’m not trying to be sneaky, but you don’t have to tell Mommy about this.” Bless her heart: she thinks I’m nineteen.

Mimi doesn’t really like food anymore, or not nearly so much as she likes treats: Mallomars, Oreos, Haagen Dazs. She picks at her food, and fills up on cookies between meals when we’re not looking. But every once in a while I nail it, and last night was one of those times.

She even ate the raw beet, carrot, broccoli, cabbage slaw that I wasn’t even going to put on her plate until she commented that it looked good. After dinner she asked for “crackers” (her word for cookie), and I told her we didn’t have any. A few days ago I told her no more cookies until she goes to the doctor (I found paperwork stuffed in a drawer that says she’s diabetic), and I talked her into a few clementines to satisfy her (pretty much insatiable) sweet-tooth.

While we peeled, sectioned and ate those miniature oranges we satiated something else: we talked.

We talked about her father, Pete, who was “Smart–so smart he was stupid!” Pete had a couple taxicabs that his father bought him, but was usually found drinking down on 8th Avenue. “He’d let someone else drive his cab. He’d drink, he’d gamble, he’d forget to bring money home to his family.” She told me about Pete coming home with “his load on” and how Nanny would squirrel him to bed to sleep it off.

“Nanny was so good,” Mimi said at least a dozen times while we talked. We talked about her three sisters too, and how much she misses them. I asked if she dreams about them and she said, “Sometimes I wake up thinking about them, but I stop myself. It louses up my head too much. If I start I have to stop myself.”

We also talked about how it was the bootlegging that got Mimi’s father Pete in trouble. They lived on the fourth floor and the ladies on the first, second and third floors would invite him in for shots of bootleg booze from their bathtubs on his way upstairs. “He’d be LIT by the time he got to us!”

“Nanny had to talk to those ladies,” Mimi said, she’d tell them to “Give him a bowl of soup instead! He can’t handle his liquor!”

Nanny eventually got tired of Pete’s baloney, and he rented a furnished room downtown though he kept showing up like a homing pigeon on the Upper West Side. Pete’s parents took care of Nanny and the five children financially, since Pete’s money never made it home, but Mimi told me that Nanny felt “that meant she also had to take care of Pete,” which she grew tired of.

Craving self-sufficiency, Nanny went to work cleaning the (Art Deco, pre-tower) Hearst Building and the YMCA on Central Park West, and my grandmother quit school to take care of the younger kids. Mimi was fifteen but in the 8th grade; she’d already been held back once for “not having enough days,” and her older sister stayed in school because “Alice was smart.”

“They told me ‘you’re smart in other ways, Catherine,’ ” Mimi said as I swallowed tears (though I’ve heard the story before) because how does a family decide which kids get to stay in school and which don’t? I can’t imagine how hard that conversation was, or if they even had it or what it might do to a kid’s self esteem.

She’s acknowledged that a lot of things didn’t get talked about “back then.” She said Nanny kept a lot from the kids, but Pete was “pretty horrible to her.” I’m bold now because if I don’t ask these questions now I may never get answers, “Did he hit her?”

“Only once,” Mimi said, “And I called the cops.” She told me about running down the street to the telephone and ratting out her father, who went to jail. I asked if you called 911 back then, and she thought for a minute then said, “No, you just picked up and the operator was on the line and you asked for the police station.”

When Pete got out of jail he told young Catherine that she should be ashamed of herself for getting her father thrown in the slammer. “You hit my mother,” Mimi told him, and that was the end of that.

We also talked about my grandfather, Joe. He’s been dead for two years and Mimi is saying all sorts of things l haven’t heard before with the most shocking being, “Poppy had girlfriends. Loads of girlfriends.”

Yeah. It’s come up offhandedly a few times now, but since we were alone sucking the juice out of sweet oranges I decided to ask a few questions: Were they real girlfriends or just ladies who were friends? Did you know them? Did you care?

She told me they were real girlfriends. She said sometimes he’d come home extra late from the bar (that he owned), but only a couple times did she make a fuss about it. Occasionally he’d take one of his girlfriends for a drive on a Sunday, and she didn’t really care except when a neighbor pointed out that she’d seen Poppy in the driveway with his girlfriend; as if Mimi needed someone pointing out what she already knew. I told her that must have been embarrassing.

She said that only once did she go into the bar and make a fuss. A bunch of the ladies “who hang around in bars” were lined up for him and she marched in there, called him down to the end of the bar and said, “If you play in the mud, Joey, you’re gonna get shit on your sneakers.” {I don’t know if my grandfather ever owned a pair of sneakers, but I’m sure the point was taken.}

Mimi told me that Poppy didn’t deny his girlfriends, and neither did he say “but you’re the one I come home to.” Instead he said, “Remember: you’re the one going shopping tomorrow.”

And shop she did. We’d go to Bloomingdales where she’d buy me the entire Esprit collection (among other things) and then send the boxes COD to the bar. One time she bought me a cotton crew-neck sweater in every color and every size because they were on sale. That rainbow sat on the top shelf of my closet for the seven years it took to cycle through the sizes.

Maybe this is how the hoarding started. Poppy had girlfriends and Mimi worried that if he left her she’d be poor again, so she stocked up.

Mimi told me she thought about leaving him, but stayed for one reason: the money. There’s so little shame at this late stage of her life. It’s enlightening, refreshing, and about goddamn time.

Well of course they did. And of course I knew nothing about it until now. Goodness I wish I could talk to my Poppy again. I wish he’d known he could speak easy to me.

Here are two pictures of my Pop behind the bar that his parents opened after Prohibition. In the first one he’s seventeen years old. The man on the left is the cook. In the second one he’s twenty-eight and apparently has something to say. 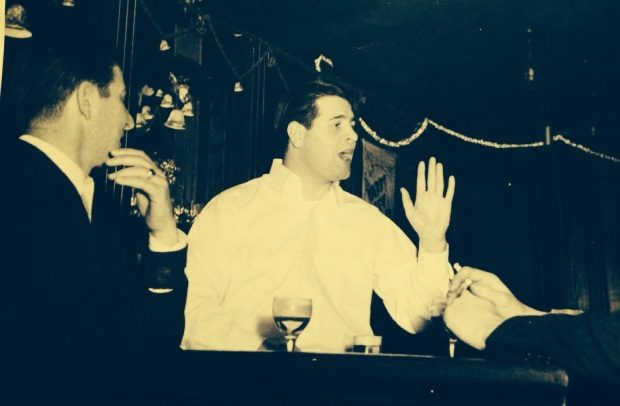 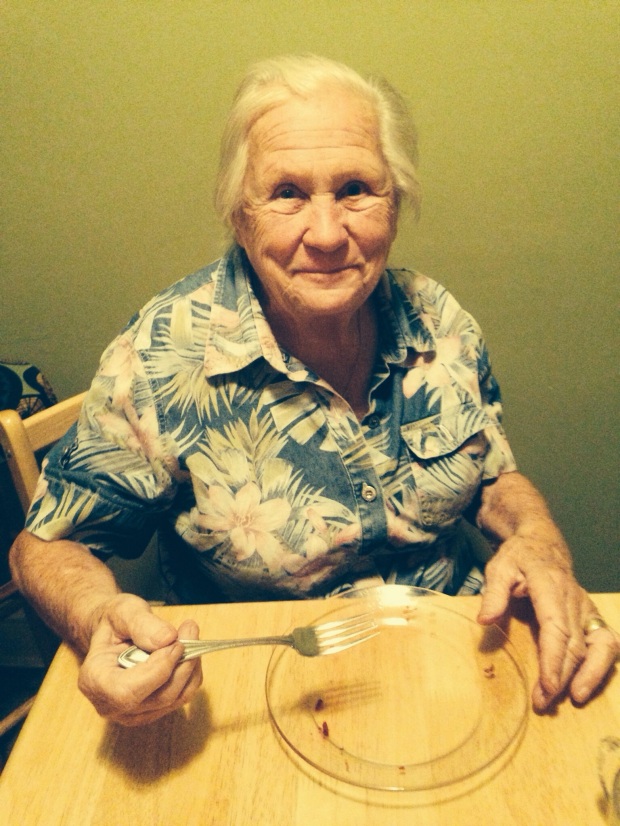 When our evening was winding down Mimi asked for crackers again, and I ran down to the corner for her. She deserves it.