Emily and I decided on “potential” as our topic about two weeks ago, and she streamlined it into “The Potential of No.” I wasn’t sold on the “no” part at first, but have had a lot of time to think about it, and to be honest I’m not sure I’ve come up with much. But here’s what I have: there’s as much potential in no as there is in yes.

It sounds so cliché. So plagiarized. So familiar, right? Didn’t someone come up with this already? Well, I’m sort of guessing not, since a Google search for “the potential of no” came up with a odd sampling of results, none of which speak to what I’ve been thinking, which is this: a no is sometimes a yes.

There’s as much power in saying no to something as there is in saying yes, because, like my last post about the many variations on light and dark, we can’t know one unless we know the other. It’s like knowing what you don’t want is practically as clear (and in some cases more straightforward) than knowing what you do.

I want to believe that the book I’ve been  writing has potential, but that sure is vague. Yes, I want it to have the potential to succeed when so many books don’t. I mean, I want people to buy it, read it, and if I’m lucky, think about it. I want it to have the potential to make a difference in someone’s life, though I know that at the heart of the matter it’s made a difference in one life—mine—and that potential alone just may be enough.

(SIDEBAR: On the topic of enough….Dr. Brene Brown says the two most dangerous words we can say are “not enough.” I honestly think that if everyone in the world watched this there would be an epic shift in how we treat ourselves, and therefore others. Here’s THE LINK to a four-minute, life-changing video.

As an adjective, potential is a win-win situation, defined as having or showing the capacity to become or develop into something in the future. I say win-win because everything has the potential “to become or develop into something,” but I’ll add a kicker: it might not be what we wanted or intended and even worse, it might not be when we begged/pleaded/bargained for it. But it will be something. It might even be (gasp!) failure, though failure too has the potential to…..ok, you know the story by now.

Too often (by me) the word potential is followed by “for disaster.” 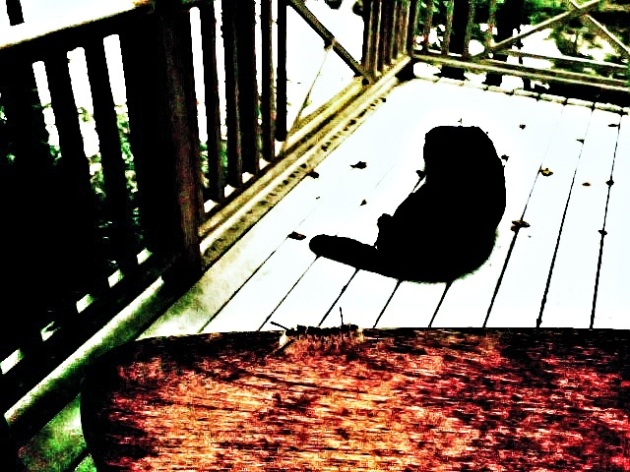 This is not a photo of Lucky looking out at the water that I forgot to crop the chair out of; this is a picture of a chair-colored caterpillar. Now I know, the caterpillar is perhaps the most overused symbol of potential that we have, and I know I preceded the photo by talking about disaster, and what in the world is so disastrous about a caterpillar? Nothing, obviously. I’m not bound for the institution…YET…But I’m sitting here thinking about the intense book editing I have ahead of me the next few days and about potential and there’s a friggin’ caterpillar there to remind me that it too is in the middle.

{Trust me: when you start thinking about potential you can’t stop.}

But the potential for disaster part is really about the fact that the camouflaged caterpillar reminds me that this is about the time of night when the porcupines come out and start acting like they own the place. Given the fact that I have a rascal of a dog, I am, as they saying, flirting with the potential for disaster. I  could go out to the garage and try to locate a pair of pliers just in case, or at least make sure I know where the emergency vet is though even though I already know it’s a good ninety minutes away. I’m alone, and that could be a long drive for the two of us so really I  must do whatever I need to in order to avoid this potential for disaster.

I got used to being alone last winter in New Mexico, and now, with modern conveniences such as telephone and Internet, I’m technically much less alone than I was then. So I’m comfortable leaving room for more allowing, though even then I allowed Luck to gallivant at night even when I knew he was running with the coyotes and there was a damn-good possibility he’d eventually encounter something he couldn’t handle. But he didn’t, so I won. Or I lost for the needless worrying. Hmmm….

Even when I wasn’t alone—when I was with friends in Rhode Island—Lucky gave me a run for my money and once stayed out all night. So now, in Maine, somewhere between those two scenarios, I’m pondering what to allow, because the more I allow the more potential there is for the dog to potentially get quilled.

So I don’t allow him off the deck after dark, but I do allow him to stay on the deck when I go inside for tea or to use the bathroom. So there’s a risk there, but he might confuse my absence with permission. Am I allowing life to develop (which it will anyway regardless of my fight) or am I risking the potential for disaster? Is there a difference?

But here’s the thing on a bigger scale: when we deduct allowing (and not just the risky kind) we diminish the possibility of potential.

And allowing, I think, is where it’s at.

A few days ago I went for a run on a trail that made me feel like I was in the Blair Witch Project. This was not an out-and-back trail, nor was it on an open hillside (like my daily hiking/running trail in Missoula), nor was it along the ocean or following the double yellow line. It was a serpentine mess in there that required keeping a constant eye on trail blazes. In this case the blazes were either white or yellow—two different trails snaking around—and all I really wanted was to not think. I just wanted to move without having to pay attention or keep track of anything. Really what I was doing was earning another lobster roll, but that’s a different story…

In the thick woods you can convince yourself that you’re lost and have completely misplaced the trail you were just standing on because all you see in front of you is an enormous slab of rock. But if you turn your eyes up and scan the trees the blazes are there to guide you. Finding the blazes on the trees gives a person the confidence to keep going; not finding them can be paralyzing. Knowing where to look and keeping calm is key. There’s so much potential for a situation to turn either way, and here’s the sucker punch: it’s   totally our responsibility.

But really, the potential for the upside of potential—the getting found instead of staying lost, the triumph instead of disaster—boils down to this something simple and elementary: pay attention.

I went on a boat trip this morning to Monhegan Island. It was supposed to be a beautiful, ninety-degree day, but at 8:00 am it was cool and foggy. I wore jeans and a long sleeved shirt with a vest, knee socks and sneakers on my feet. I packed a down jacket and knit cap, but also shorts, a t-shirt, and a brimmed hat. I packed sandals and a rain slicker. Yes, all this for an eight-hour excursion.

Now, I’m back at the house generously loaned to me for writing, and I’m sitting on the deck. The temperature is still hovering around eighty though the sun is down, and that caterpillar is still giving me the stink eye. I’m starting, again, to think of the potential for disaster.

I’ve given myself a tremendous gift lately of time, and with that time I’ve been able to allow my life to unfold. I plan some things in advance, but most I leave to chance. This would not work for everyone, but it seems to be working for me though it isn’t without intense, incredible (personal) responsibility.

I’ve given myself the task of not only writing a book, but also of rewriting it, now for the second time. That’s three times for the non-mathematicians out there. That’s a lot. Trust me. It means, in practical terms, that no matter what else I’ve been doing, I’ve also been constantly, incessantly thinking about writing. You should see all the text messages and voice memos I send to myself; it’s  b a n a n a s.

But sometimes I say no to writing. I give myself permission to go on a boat ride or to read the great book I can hardly put down. When I go out for my nightly lobster roll I might, instead of bringing a notebook to the picnic table, just simply sit and observe. I allow the potential to strike up a conversation with a stranger or see something I might otherwise have missed

So. As it turns out, we can’t talk about potential if we don’t also talk about permission.

I addition to three seasons worth of outfits, I also packed my iPad in my backpack today for the day-trip to Monhegan Island. I planned to find a nice spot to sit and write. I planned to write this blog post there, instead of tonight. But I never took the iPad out of my bag, and only even considered taking it out one time. I walked, took pictures and talked to people. I learned about a not-to-be-missed country fair that I’m now going to hit next Friday morning before I head south.

Near the end of the day I was walking back toward the ferry dock and I saw this huge cocoon. I have no idea what insect larvae hatches in that beast, but I found the mass impressive: 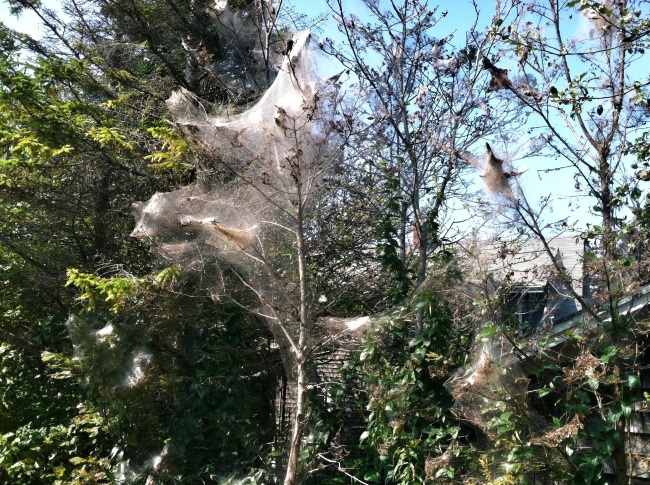 I wasn’t sure how I felt about this blog post about potential being driven by the metaphor of the caterpillar, and now, the cocoon, impressive in size or not. But in the midst of the writing, I decided to play it safe, and I went to the garage to take a look around for a pair of pliers just in case, and on the way there I saw in the driveway a beautiful, dead butterfly. I wasn’t sure it was dead at first; it looked too perfect.

So I found the pliers, put in a load of wash and came back out. Still there, still dead. So I did what any normal person would do: I brought in inside, put it on a piece of paper, and took a photo of it. 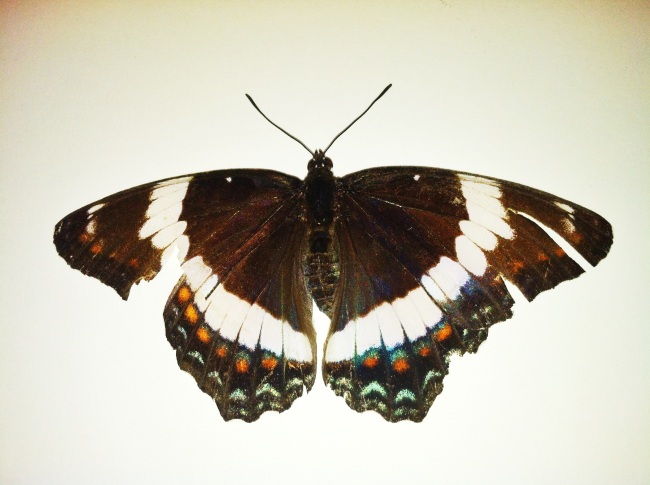 I did not make this up. Honest. I swear I didn’t spend the day looking for the caterpillar, cocoon, and dead butterfly just so I could find some way to talk about potential, but there they were for me to see. For me to pay attention to. It’s a confirmation that, as always, what happens in real life is better than anything we can imagine.

And by the way, locating the pliers was simple, though I doubt I’ll need them. But I’ll tell you what I’m not going to do right now: as impressive as it is, I’m not going to go take pictures of the lightening that’s going on outside. Instead I’m going to do this: I’m going to give myself permission to get in bed and read. The sun will rise tomorrow on a new day filled, as always, with potential.