I’ve stayed in some terrible motel rooms. I’ve stayed in rooms where if you came back after hours (guilty) you had to shout at a padlocked gate to be let in, and then wait for a man to come open the gate. He let my friend Shellan and me in one night in what looked to be a hand towel. There was no floor space in that room, but there were two beds, so Shellan and I slept with our suitcases. And we laughed. In the morning we laughed harder when the water pressure in the shower was so strong it removed skin.

I’ve stayed in rooms where it felt dangerous to go outside after dark, and rooms where I convinced myself people were letting off fireworks because believing in that was the only way to make it through the night.

There was the room in Billings, Montana that had a pair of underpants large enough to catch wind on a small sailboat hanging over the shower curtain rod. Okay, truth: I didn’t stay in that room; I ran like hell and drove the five hours home.

Tonight I’m in a room on the eastern end of long island. It might be considered a non-smoking room only because no one was actively smoking in it when I arrived, but the stench (despite the open window) spoke otherwise. I came out here because I needed a respite from the city and some space to write and think. I am staying at this particular motel because it’s the only dog friendly motel around and because I wanted to needed to bring my best friend and loyal partner in crime, Luckydog.

Lucky turned twelve a few weeks ago and our traveling days are on the numbered end. Lucky’s twelfth year was a big one. He turned eleven in New Mexico. It was Easter Sunday and we spent some time around the farm where we lived. I made him pose with a cookie.  He didn’t know it yet, but we’d be leaving that place a week later and so when I took him for a birthday run past the fork in the road I knew it was one of the last times, but he didn’t. He has no way of knowing these things, and he simply has to trust me.

The trust between a dog and his owner is amazing. They rely on us for everything, and oftentimes humans fail them, but when a dog is lucky, like Lucky, he knows it. Lucky had a hunch when he picked me, and our story is a love story, perhaps the greatest love story I’ve known.

Almost two years ago I got on a stage in Missoula (where my heart lives) and I told the story about how Lucky and I met. You can read about my experience HERE and at the end there’s a link to the podcast of me telling my story with no notes or anything—just a heart full of love for my boy and a story I adore.

This motel has a laminate floor, which is odd for a motel but probably cleaner than any carpet would be. I’m glad I have flip-flops. The bed sheets are mismatched and I wouldn’t dare take a black light to the bedspread. I’m glad I have my travel survival kit of my own pillows and sleeping bag. There’s no phone or coffee pot. There aren’t even cups. I was given a remote for the television when I checked in.

The towels are rough, small and transparent, but because I never fully unpacked my car from last year’s traveling extravaganza I have my own towels too. I found a French press in my car and I stopped to buy an “emergency” electric kettle (thank you Tanger factory outlets for having a Williams-Sonoma with 20% off electrics, and please god keep me out of the rest of the stores…)

Lucky and I rolled down the windows and took a drive along the North Fork’s wineries and farmland and I smiled and cried because despite how well Lucky and I’ve been making out in the city, exploring uncharted territory is where and how we thrive. We drove without a destination, but I owed him a walk, so we stopped in the village of Greenport for a stroll.

Greenport has everything I like in a town: a hardware store, an old-fashioned soda fountain, a locally owned department store, and a waterfront. 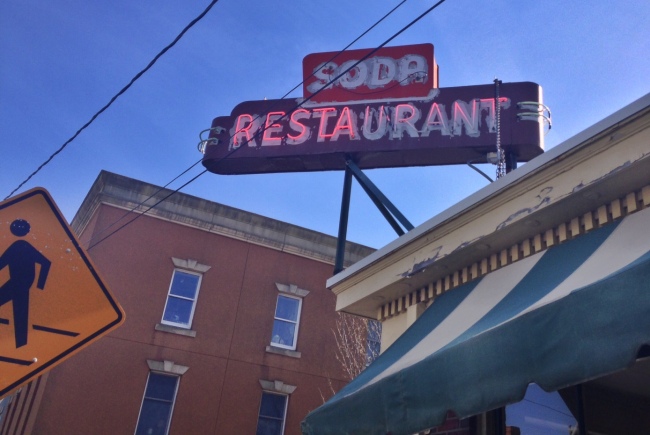 We found a pet store, where Luck picked something out, and then I bought a dress (at a different shop). “He can come in so long as he doesn’t lift his leg,” the owner said. I stopped at a health food store and bought soap, air freshener and a candle. They had coffee beans but no grinder, so the hunt continued.

I popped into a place called D’Latte, and while the owner made drinks for some other customers I snapped a photo of his gelato sign, and he said, “Please don’t take pictures.” 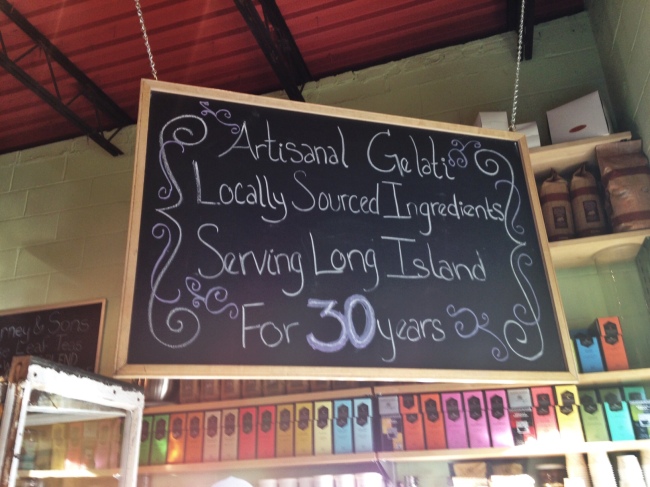 “I’m sorry,” I said, “I like that you use local ingredients and was going to Yelp or Instagram it… But I won’t…” Despite not getting off to a great start, Frank wanted to make sure I got coffee I like and in order to determine my preference he gave me a scoop of made-by-him coffee gelato. It was a hit and I told Frank I was sure I’d be happy with whatever beans he ground for me.

He spoke in Italian to his friend who walked through the shop, while I stood there eating my gelato. “I just told him I love you,” Frank said, and I said, “But the picture…..” We decided to just let it go.

Frank told me I should stay for open-mike at his restaurant, which is attached to the coffee/gelato shop and I said I had to get back to the motel to work on a book I’ve been writing for too long already, and he said, “come with me….”

We squeezed through the shop into a back room that he uses for private events because he wanted to show me his antique typewriter that still works. The room reeks of writing, art and parties. The light was amazing. I asked if we could make a party when I publish my book and he said of course then pointed to the piano and told me Billy Joel had played it. I asked if I could take a picture.

He said I could take a picture.

Frank had some new employees to train, so we had to get going. He asked where I was staying and then told me he could make a few phone calls and get me a better place to stay—for free—but I told him I have a dog. He tried and said, “I could get you a cottage…all to yourself…on the water, except for the dog.”

Before I left Frank gave me a bottle of wine called Spaghetti Red because he also has a vineyard. I mean, of course he does. I told him I was going to save it, because finishing this book is special to me and I’m silly and sentimental. “Ahhh…..go ahead and drink it; I’ll give ya anothah one.”

I stopped for a couple slices of brick-oven pizza on my way back, and then tried to make a cup of tea but the kettle doesn’t work. Maybe it’s not meant to be. Maybe I’m supposed to drink the wine. Maybe I’m supposed to walk out for coffee in the morning because there’s a deli just up the road that appears to be in a converted garage at somebody’s house. As I drove by with all my fixins for morning coffee I worried I might be missing out and would have to figure out a reason to go there, like for an egg and cheese sandwich or lottery ticket. But that white-girl problem took care of itself.

Sometimes it makes no sense to look for the reasons and just relax and let the reasons find you. 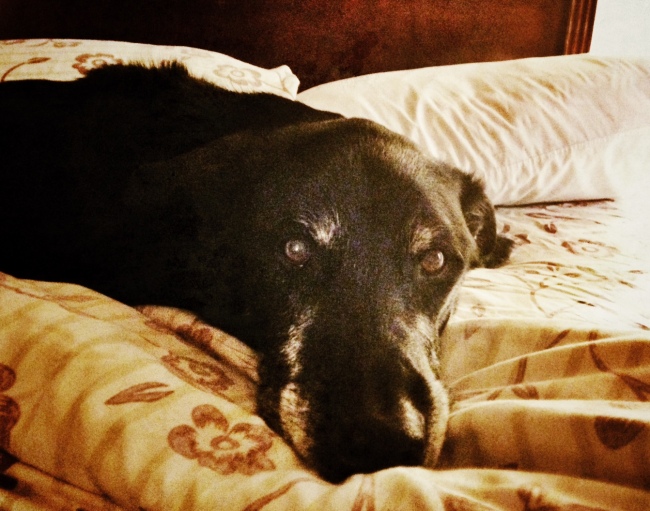 Now: air freshener and regulating the unit that is both an air conditioner and a heater, and before sleep: taking my luckydog for a walk, because this dumpy motel is on a river and I bet it’s gorgeous out there.