Friday was bad. High school sporting competitions were first relocated to fields with cleaner air, but when the overall quality continued to worsen they were flat-out cancelled. The University of Montana Grizzlies played—only apocalypse could cancel that—to 24,000 fans.

One friend reported on Facebook that she was “Suffering FB induced air envy,” then she begged for rain. There was a lot of chatter about cabin fever and the general consensus is that it would be nice to get out of town “just to take a deep breath.” The problem is: where to go? There are fires all over, and even if you go to an area without fires there’s still the element of wind to blow smoky air into fire-free valleys. There’s also the chance that a new fire could sprout up anywhere, anytime.

The closest fire to Missoula is about fifty miles south in Hamilton where almost five thousand acres are burning and the blaze is 25% contained. We’re getting our share of that smoke, as well as smoke from all other directions. By far the most smoke is coming from Idaho, where the Mustang Complex fire is currently at 327,017 acres with 20% of it contained. 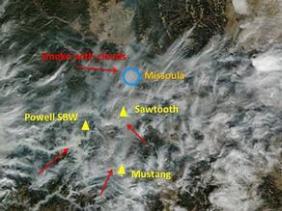 It seems selfish; we worry about having cabin fever while our neighbors to the south worry if the cabin will make it. This is the warning down in Idaho: Residents returning to their homes are warned that hazards may exist such as weakened trees, rolling and burning debris, and thick smoke along roadways. Residents should be fully prepared to leave at a moment’s notice if there is a change in fire conditions.

So there’s a bit of smoke in the second largest city in Montana, but it’s not like we’re in Beijing, where their Air Quality Index (AQI) is regularly as bad as our worst. There’s a twitter site that regularly tweets the AQI in Beijing, and China has asked the American Embassy not to release its air data.

The research is clear: pollution causes oxidative stress to the body. Prolonged exposure increases the likelihood of cardiopulmonary diseases and inflammation, which takes its toll on all areas of the mind and body. With its increased respiration, exercise further increases risks. Outside Online published an article back in July about this, and cited Netherlands research that “estimated that the air-pollution effects of switching from a car to a bike for short daily trips in polluted cities would subtract between 0.8 and 40 days from the average life span—but the additional exercise would extend it by three to 14 months.”

I know this smoke is bad for me, but I also know what’s worse: staying still. My recent blog post talked about how statistics lie, and one reader said, “ I know when my gut tells me to go in a certain direction, I’m inclined to gather data that supports it.” It’s true, sometimes sadly so. More than one of my friends has suggested that I am capable of justifying anything, and—like most vices and virtues—the door swings both ways.

I discovered a long time ago that physical exertion is crucial to my mental health. If walking and hiking are good, then running is better. I rarely run long distances, and with even less frequency run fast. It could be argued that I don’t run—but rather that I jog—but I don’t care what you call it— between touchdowns both feet are simultaneously suspended in the air. It both literally and figuratively moves me. I’ve been relying on running as a mental health counselor since before going for a drive was an option, and it’s the most dependable antidote to a bad mood that I’ve ever found. It is basically free—each run on a pair of one hundred dollars shoes costs just pennies—and you can do it anywhere. You can do it and actually go somewhere, or you can do it on a track, up and down bleachers and even on the stairs in your house if that’s all that is available. But however it’s done, it sure seems to work.

I play mind-over-matter with myself a lot. “If I think this doesn’t hurt, then it doesn’t,” or in the case of bad air quality, “I’m going to imagine that the sky is blue and the air is clear.”

I know we can’t all run. I dedicated a run last week to a runner friend who just had knee surgery and can’t right now. Last February I ran with thousands of others in honor of Sherry Arnold who was abducted and murdered while on a run. While on a run. That just isn’t fair, but so many things in life aren’t.

We get angry at forest fires for “ruining” some of our summers, and in this case our September, typically a glorious time in Montana. Some say the forests are angry with us for encroaching too deeply into wilderness areas, and that the fires are just doing what they do: staying healthy in their cycle of life and death. Fires help maintain soil health by converting ammonia into nitrogen, which is a crucial component to plant prosperity. Things like artificial fertilizer and chemical pesticides harm natural nitrogen cycles, so…in lieu of shoving an amateur science lesson down your throats: you do the math.

Destruction can be beautiful in a heartbreaking way, as can running in the midst of it. On my recent hikes and runs on Waterworks Hill I’ve often been alone. It’s creepy to pull up to a near empty trailhead, and when I’ve been alone I’ve thought 1) have I completely lost it to be up here right now? and/or 2) Oh Wow! I’m alone! I’m going to crank up my music and sing my little heart out!

But my stubbornness does not always serve me well. Friday was one of the worst smoke days we’ve had in Missoula—with an afternoon AQI to rival Beijing’s—but because my body begged to move and sweat, I headed up to the hill. I walked for thirty minutes, then said “What the hell?” and ran for another thirty. I went up there crabby, and came down decidedly less so. It worked. But did it? I worked all day Saturday and then was so headachy, fatigued, and downright irritable that I missed a good friend’s birthday party. I felt bad about it, so what did I need to do on Sunday?—you’re right, hit the hill again.

I walked with a friend, then the sky cleared enough to be noticeable and I decided to stay and run by myself for a while. I hadn’t needed motivational music since I went with a friend, and my ear buds weren’t in the car. I debated if I felt like running alone—and by alone I mean without the Rolling Stones, Wyclef, and Taylor Swift—and it turned out I did. It was, after the all, the way I’d started my twenty-plus year love affair with running: in silence.

But it’s not all that silent when you think about it, though it is without external distraction. I listened to my feet hit the ground and my breath and my heartbeat. I heard Lucky panting next to me, and I noticed him in ways I often fail to. There was no iphone app telling me how far or how fast. There was nothing to hold. It became a running mediation where I thought of nothing else but exactly what I was doing in each moment of feet lifting and feet landing, breathing in and breathing out.

Despite the lingering smoke, it was one of the best runs I’ve had in awhile.

A picture of a smoky sunset from Hamilton, MT that I ripped off KPAX-TV’s Facebook page.