Eric Adema, my good friend from Kent, turned forty yesterday, and he asked this on his Facebook page:

“What I’d like more than anything else today is for everyone I know to go out and practice 1 random act of kindness on a total stranger. Most people I know do this anyway, but today make it an extra good one.”

How lovely, right? I think we should all do this on our fortieth birthdays. If we did—WOW!—the world would surely be a better place.

It was on my mind all day, but the thing about a random act of kindness is that it has to be spontaneous and, well, random. My friend Rich and I went out to lunch then ran errands around town. We stopped at Wired, the gorgeous, exotic coffee shop, and I thought about buying coffee and snacks for the high school boys who asked me outside, “Do we look seventeen?” But I was sitting outside enjoying my tea. 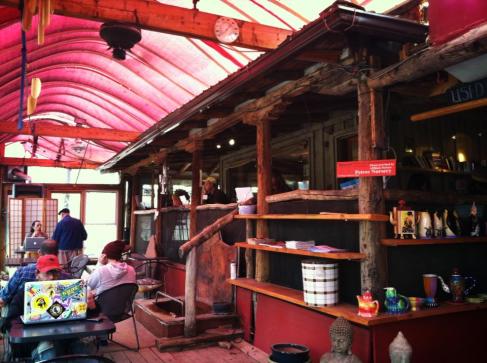 Rich and I were on our way out the door, when he stopped to say, “Good Afternoon, sir” to a man eating soup by the door. “Sir?” he said, “I’m no sir. I’m not an Officer or a Lieutenant?” I walked outside and left those two to work it out.

I sat there in the sun, drinking my tea, listening to as much as their conversation as I could hear, which was punctuated with boisterous laughs from both sides. I’m deep into the book I’m writing now, but always thinking of new books. One popped into mind, “Rich and Jaime Travel Around and Talk to Everyone.”

It’s true; we do. Now, I wrote about Levi and Amanda last week and labeled then my newest old friends because although we just met, we connected quickly and I hope to know them forever. Rich and I are actually old friends—we went to school together starting in Kindergarten—but for many years we lost touch until this winter in Taos, so he’s my oldest new friend. And everywhere we go, we talk. We connect to each other and to strangers through talking and sharing stories. It’s awesome.

NOTE: I love my friends. Every single one of you who brings so much joy to my life whether you’re near or far. I mean it. So much.

Rich and Stan came out to join me in the sun. This is where Stan and I officially met, and we hugged right out of the gate. He smelled my hair and neck and swooned a little, but we cooled him down and then we sat.

We sat there for a while and learned so much about him. He’s ninety-two years old. He has five kids with five different women. His youngest is twenty-six and his oldest is twenty-five years younger than him. We didn’t do the math, but I said, “Your youngest son’s mother must have been much younger than you?”

He described her as being “As big as a house” but lovely, and she was at “that age” he said, so I asked what age, though I knew. “Thirty-nine,” Stan told me. I told him I’m inching up on thirty-nine and he said, “Beautiful single women make the world go around.”

Rich came back and we all kept talking about Stan’s travels, his twenty-five years in Taos, his shopping list of one item—dish soap, which he recommends for the tub—and then we looked at his sketchbook of drawings. He was in Japan during WWII, and he’s traveled a lot since then. He’s made a family for himself here with the Native Americans at the pueblo and with the Spanish in the area too.

He told us about big, white cat who showed up and who he decided to feed. He told us about his neighbors and their dog, and how the woman of the house is “More beautiful than Beyonce,” and how he brings her son two toy cars every day. (That may not be random, but it sure is kind.)

The sun dipped behind some trees and Stan started to get cold. Rich and I had more errands to run, so it was time to say goodbye, for now. I couldn’t help but think of my Poppy, his own service in the second World War, and the flag I received at his funeral that tipped my scales big time. He absolutely hated goodbyes and didn’t say the word, so we always said, “See you later,” So I told Stan we’d see him soon and we knew we’d walk him inside.

It was clearly time for more hugs. I stood in front of Stan to help him out of his chair, and he ignored my hands and put his two hands firmly on my hips. He liked what he felt and wasn’t shy about expressing it.

We hugged. And hugged. And hugged. Stan said a couple of things that aren’t fit to print, but there was a mention of what might have been happening in his sweatpants, which he told us he has five pairs of and wears every day. He smelled my neck some more. He nuzzled right in there. He told me he liked my earrings. He wanted a kiss and I delivered. He wanted a “real kiss” but I laughed it off. He got a little frisky. He reminded me he doesn’t want any more children and I told him I didn’t think he had anything to worry about. We laughed. Rich said he wished he’d caught the whole thing on video, but he did snap a couple of pictures of the Love Fest between me and Stan, who despite turning out to be something of a stinker, made my day.

That’s the thing about a random act of kindness. You make someone else’s day, but yours is made too. Thanks, Eric Adema, for encouraging me to take the time to sit and spend an hour with a darling old stinker of a man; you’ve certainly brought much kindness to my life, old friend. Cheers to you and forty! 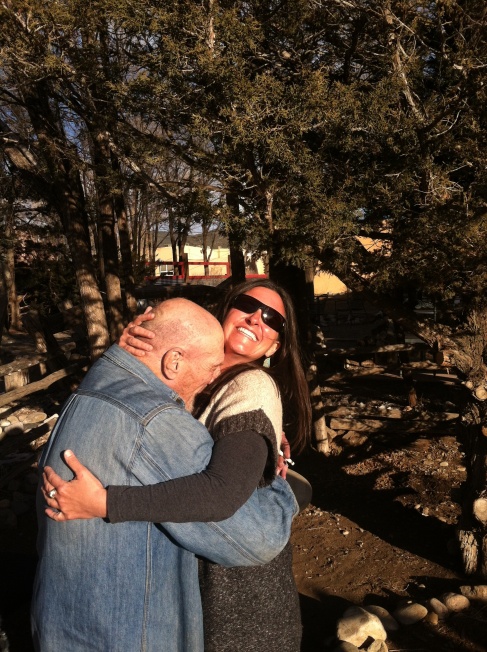 “We tell ourselves stories in order to live.” It’s a great line, and the first line of the first essay in Joan Didion’s THE WHITE ALBUM, published in 1979. In 2006 she used that brilliant line as the title of another book of essays, which is a collection gleaned from her first seven nonfiction books.

No topic is off limits for Didion. She writes about politics and gangs, the Hoover Dam and Georgia O’Keefe, counterculture and permaculture. She wrote bravely about the death of her husband, which was followed by the death of her daughter. She wrote about that too. Didion confronts dichotomy and contradiction head on, and creates heartbreaking portraits of both people and place.

She’s unapologetic and unsentimental. Her observations are astute, her prose is spare, and she untangles life in a way that makes the reader feel she’s looking her in the eye, saying, “I get it.”

There’s this theory in storytelling that the more intimate and personal the detail, the more universal the story becomes. It’s curious, really, and it seems the opposite would be true, but when a storyteller trusts the reader, the reader trusts herself.

I like to craft stories on paper. I’ve been writing a lot this summer, and I love the process of telling a story then cutting it up. I love choosing what to reveal and what to keep hidden, where to be overt and where to be a little bit coy. The end becomes the beginning, there’s a narrative thread for the reader to hang on to, and there are a few twists and turns in the middle. It’s on paper, a permanent record of sorts.

Back in May I did something different. I got up on a stage in front of a few friends and a lot of strangers and I told a story. No notes, not even an index card. I thought about writing on my hand or arm, but figured that would be weird. I practiced a little beforehand, but every time I did I blew it. I went over the allotted ten minutes, I forgot a detail, I told too many details.

When the time came to tell the story I thought about blowing it off, faking sick, or just saying, “I can’t.” I took ballet and tap dance lessons as a kid, and all year I’d practice for the recital and order the costume then I’d back out in the final hour. I’d tell my mother, “I can’t get on that stage,” and she’d say, “You don’t have to.”

At thirty-eight years old it was time to stop making excuses. You might be thinking, “What’s the big deal?” Ten minutes on a stage isn’t a lot. Telling a story about how I met my dog is easy; it’s a story I’ve told many times. But fear is a power deterrent. I started my “story” by talking about how what we’re most afraid of is rejection. I needed to hear my voice tell someone else’s story before I could tell my own. Wrap your head around that one. {My friend Heather wrote a great blog post on fear yesterday. It’s good stuff. Check it out here.}

And then once in a while you have to say, “What’s the worst that could happen?” and you just go for it. I washed and brushed my hair. I had a cocktail and ate a banana. I sat with my friends. I listened to others tell stories and I didn’t run out the back door. Then I got on the stage, said a few things I didn’t mean to and forgot a few things I meant to. And I survived. People laughed, but not at me.

Winston Churchill said, “If you’re going through hell, keep going.” I’m okay with two steps forward one step back, but no steps forward? I’m all full up on that.

I was nervous about what I’d do with my hands while I told a story/freaked out on stage, and I had a dog biscuit in my pocket from Bernice’s bakery which I fingered like a worry stone while I spoke.

When I was done one of my friends let Lucky off his leash (we’d smuggled him in after intermission) and he found his way to the stage, but was terrified to go up the steps. Marc Moss, the mastermind behind the event (TELL US SOMETHING)  encouraged Luck up the steps, but it turns out the stage fright apple didn’t fall far from the tree. We can both ham it up just fine among friends, but on a stage…hell no!

Then I remembered the treat. I pulled it out of my pocket and Luck found the courage to make his stage debut. Here we are. When I first saw this picture I wondered what I was doing with my arm, then I saw my sweet boy reaching up for his prize.

And finally, last but not least, here’s a link to the podcast for my story called “Picked By Luck.”

You can explore several dozen Tell Us Something podcasts HERE and you can support future storytellers by showing up at the Top Hat on October 9th. The topic is “Forgiveness.” Um, what’s not to like? Ok then, see you there.

“Expose yourself to your deepest fear; after that, fear has no power, and the fear of freedom shrinks and vanishes. You are free.” Jim Morrison